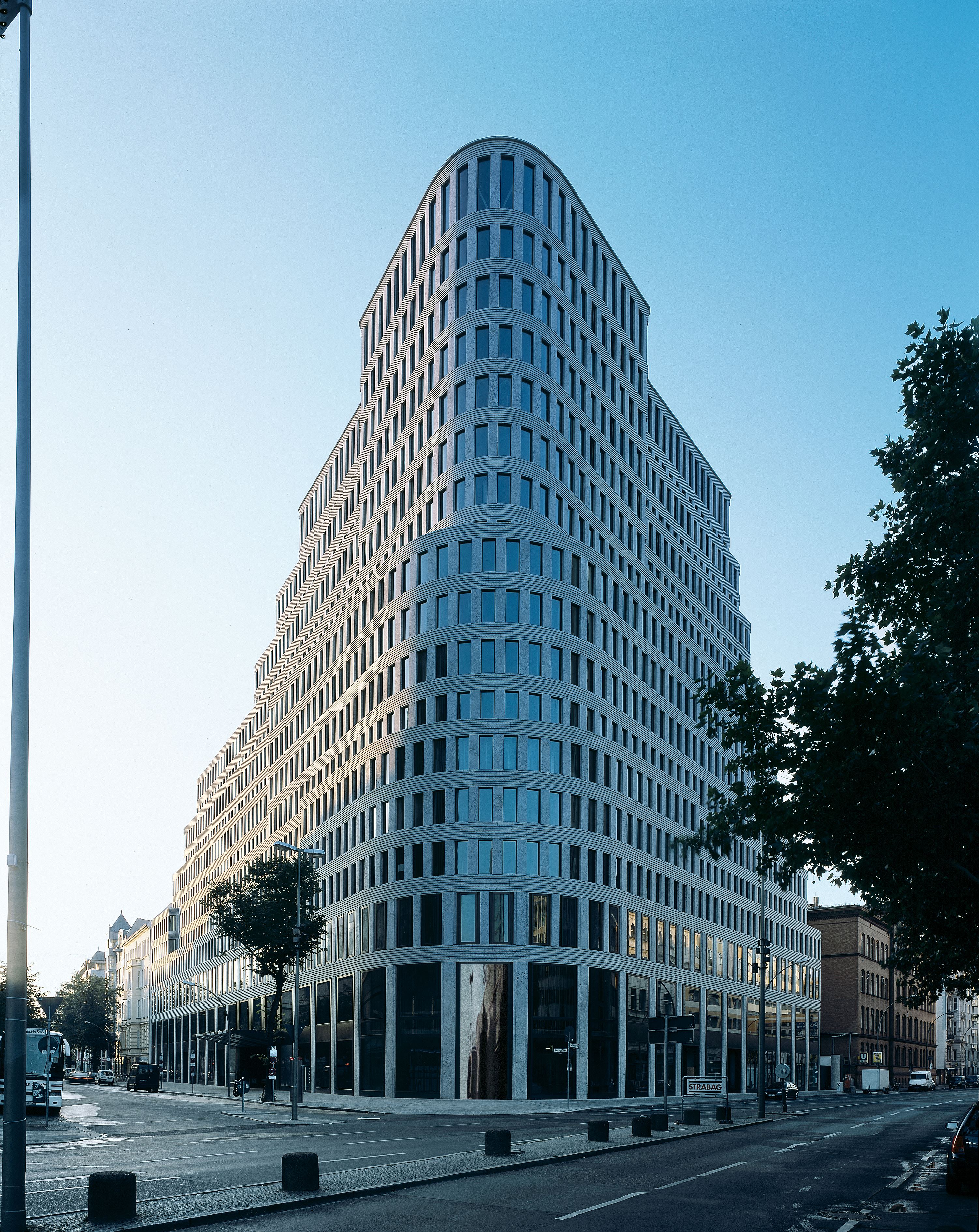 The hotel trade is booming in Berlin: 13 million overnight stays were counted last year, about 800,000 beds were on offer. With the Concorde Hotel in the town centre, another luxury hotel has now opened its gates in November. Its location opposite the famous Café Kranzler is not the only outstanding feature: the natural stone façade invisibly fixed with fischer undercut anchors is just as remarkable.

The five-star hotel with 311 rooms, banqueting hall, conference rooms, restaurant, wellness area and bar is managed by the French Concorde chain of hotels which also operates the renowned Grand Hotel Esplanade in Berlin. The building also accommodates offices and flats, the city waxworks, shops and underground car parks. The investors Grothe Immobilien Projektierungs GmbH and the architect Jan Kleihues have successfully managed to reflect the high standards of the hotel in its appearance, appointment and the façade design of the 17-floor building.

“In terms of urban space, the new building volume completes the space created by the existing development. The structure is also designed to supplement the traditional block: the façade follows the course of the street, and the structure steps down to the usual Berlin eaves height at the ends of the building”, describes Jan Kleihues the building.

These recessed building sections with their uniform appearance of the joints along the axis of the windows and the breastwork define the façade clad with 9,200 square metres of natural stone. The façade slabs conceal a 100 mm thermal insulation layer, 60 mm air space and the drainage downpipe – with a joint width of 4–6 mm virtually invisible to the observer. The consistency, shape, size and weight of the façade made of Kirchheim shell limestone elements proved to be a particular challenge for fixing engineering, which also had to comply both with the high aesthetic claim and with strict building regulations.

Working closely with the experts from the general façade construction contractors Reinhold &Mahla and with the IBT engineering bureau, the fischer façade specialists took a good look at these requirements and came up with exactly the right kind of bespoke solution, made possible by using the fischer FZP undercut anchor. As the undercut anchor carries significantly higher loads than conventional bolt bearings, the thickness of the biggest slabs could be kept as low as 40 mm. The lighter façade reduces the structural load acting on the building and therefore also the costs. A high degree of prefabrication, the precise and time-definite delivery of the natural stone panels and the tightly organised assembly and mounting work allowed between 250 and 300 square metres of natural stone slabs to be fixed every week, in spite of the tight and confined space available at the building site.

As the use of the fischer FZP undercut anchor set in natural Kirchheim shell limestone is not regulated via DIN standards or a general approval, the individual approval had to be obtained. The IFBT Leipzig tested the tensile bending strength, the loadbearing capacity and the stability of the construction solution and confirmed the suitability of the anchor.

The shape and the height of the building (over 60 metres) called for an expert wind report, with a wind suction of 2,400 N/m2 and a wind pressure of 1,300 N/m2 included in the structural design.

The Kirchheim shell limestone used in the façade is a very hard, but it is also a porous stone with clay inclusions. Maintaining the required safety levels, the 1,500 support plates (40 mm) and the 4,500 breastwork slabs (75 mm) were fixed to the subconstruction. The breastwork slabs (1.50 x 0.42 metres maximum size) were each fixed with four fischer FZP Zykon anchors 13 x 30 M8 W and the support plates (2.43 x 0.6 metres) were each attached with six fischer FZP Zykon anchors 13 x 30 M8 W.

To make the installation work easier and to ensure that the weight of as much as 220 kg per façade element was safely introduced, fischer developed a so-called suspension strap which involved two undercut anchors being fixed onto a mounting bracket. Varying degrees of sunlight exposure result in temperature fluctuations on the surface of as much as 50 °C. The jamming loads generated in the reveal slabs are compensated by sliding angles.

Another formidable challenge faced by the façade builders was the characteristic rounded design of the front of the building. The slabs sized 1.50 x 0.42 metres are each fixed to four brackets with welded double bolt brackets. For the rounded supports, the fischer undercut anchor was the preferred element for structural and design reasons. Each of the 300 façade elements has been individually designed and manufactured.